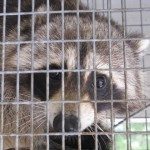 One day while doing the copious amount of preparation I normally do for the Late Show, I hear a rustling in the window well above me.

Sounded to me like it could have been one of the thousands of s that roam Manalapan; so I decided to take a look.

Actually the thing was as big as a bear so right away I thought it was no cat.

And then I mumbled something like, “don’t tell me it’s a f’n raccoon!”

And sure enough, I go outside, and there staring me in the face is just what I thought it was.

So I call the cops who then send over a couple of nice people from animal control.

The dude takes this long pole out with a loop on the end and snares the beast, which lets out a screech like I’d never heard before.

One, two, three, chop chop and he, with the friggin’ thing was out of there.

Moral of the story: that’s what you get for living in a place that used to be plush woods.

Well, the raccoons and foxes are on the prowl, and even though they look harmless, don’t screw with them!

According to this: a raccoon attacks 6-year-old girl in Bernardsville the other day.

Everything was fine Monday afternoon until Heather MacDonald heard her 6-year-old daughter scream. A raccoon was attacking her in their backyard.

“The raccoon walked across our lawn, and from what my daughter says, it just attacked her,” McDonald said. “She was just sitting there digging. She tried to run away but fell backwards. I heard her screaming.”

MacDonald, a nurse, said she knew what to do to try to protect against a rabies infection: she washed the wound out with warm water and soap for 10 minutes after calling 9-11.

“The reason for this is that the rabies and virus lives in the saliva. The sooner you wash the wound out, the less virus to be absorbed,” she said.

Her daughter was treated at Morristown Medical Center for what MacDonald called “a pretty bad bite.”

And the family is following up with the hospital’s emergency room for the rabies vaccine series, MacDonald said.

According to Kim Saunders, of St. Hubert’s Animal Welfare Center, the raccoon has still not been found and it has not been determined whether the raccoon had rabies.

In March, another young child was bitten by a raccoon in Denville, NJ.com previously reported. The child had been playing in a wooded section of land behind his Indian Lake home when the raccoon approached him.

That child was also treated at Morristown Medical Center, as the raccoon was not immediately captured after the incident.

And rabid foxes are out too, according to this report:

A sixth rabid animal has been reported in the county this year and the second rabid animal reported in East Brunswick, according to a Middlesex County Office of Health Services news release.

A fox tested positive for rabies in East Brunswick in the vicinity of Matawan Road and Squire Street, the release said.

The East Brunswick animal control officer responded and the animal was sent to the New Jersey Department of Health Laboratory for testing. Tuesday, health officials learned that the animal tested positive for rabies. No animal or human bites or exposures have been reported to the office, the release said.

It is recommended that residents should avoid contact with wild animals and immediately report any bites from wild or domestic animals to the local health department and consult a physician as soon as possible.

Also, residents should be sure that all family pets are up to date on their rabies vaccinations and licenses.

Signs of unusual animal behavior include moving slowly, acting as if it is tame or acting aggressively. The animal might appear sick, have a problem swallowing or have an increase of saliva or drooling. The animal might have difficulty moving, have paralysis or bite at everything if excited.

As I said, don’t screw with them!